Now to the fun stuff; the actual review! If you are new to the Elder Scrolls scene, this is the third game of the series, preceded by Arena and Daggerfall. The beginning of the game takes place on a boat carrying prisoners, one being your character, to the province of Morrowind. Once you dock, you learn that you mysteriously have been set free and released from imprisonment under the emperor’s orders. From there is the start of an experience completely open-ended that will have you playing around the clock for months to come. (Note: I used a PC running Windows XP with 2 GB of ram, and a 2.4 GHz AMD Athlon Processor to play this game).

First off, the graphics are gorgeous. One must take into account that this game was released in 2002 to entirely understand how good the graphics are. When it was released, it was one of the best looking games on the market. It is hard not to get sidetracked while doing quests just to go exploring through the beautifully laid-out and lush landscapes. Adding to that, every object in the game was hand-placed by a developer; from a small rock in the wilderness to a hidden sword in a cave. The fact that the camera angle used for your view is first person (you can also change to third person if wanted) only magnifies the beauty that is already there; it is quite easy to feel like you are actually in the game. All of the colors and textures used match perfectly within the environments that they are placed and produce a completely realistic, Middle-Earth like atmosphere. All of this together creates an astounding feel to the game. You feel frightened when you first face the path that traverses Red Mountain, with its infestations of Corprus plagued enemies. Your breath is taken away the moment you stumble upon the intricate plant inspired design of Sadrith Mora. Overall, the graphics and atmosphere do not come much, if any better than this in the year that it was released. 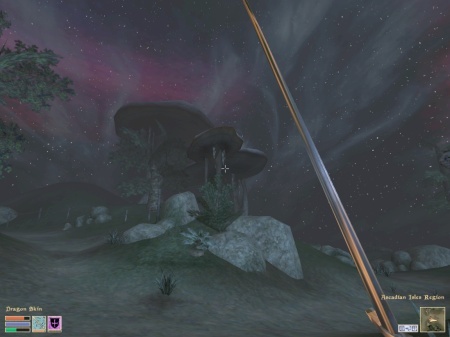 A beautiful night in the Ascadian Isles Region.

Sound in Morrowind does not quite keep up to the same standards as the graphics, but it doesn’t disappoint either. Here is an example of one of its cons: there is exactly one song that plays on a continuous loop while exploring and exactly one song that plays when an enemy is attacking you. They can get quite old and may force you to turn the background music off in the options menu. Other than that, there really isn’t much to complain about. You can hear the resounding thud when you hit someone with a sword or you get hit yourself with say, a giant warhammer. Water sounds refreshingly nice while swimming or wading through it and it is always nice to hear your enemies groan, scream, and curse you as they fall to the ground dead. Which reminds me, it isn’t rare for people to insult you out loud. Apparently the majority of Morrowind’s inhabitants do not like foreigners, or as they put it, “outlanders.” It’s quite funny when Ordinators (guards that worship the Tribunal and dress in armor that if you yourself wear will get you attacked by them) callously tell you “I’m watching you.” It can definitely send a chill down your spine the first time you hear it. The thunderstorms will make you shiver with the patter of rain and booms of thunder. Also, if you have an internet connection, Bethesda released a patch that adds sounds to the Ascadian Isles Region such as bugs flying around that you can download off of their website for free.

Another great thing about Morrowind is that everything is loaded as you go, which means no loading screens except for one major exception which I will get to in a second. When Morrowind was first released, the loading on-the-go could prove to be a little choppy. It’s never fun when you’re running for your life in an epic chase down by an army of Daedric worshippers and the game freezes for about three seconds to load a new area. Fortunately, much stride has been made in the way of computers since 2002 and those loading screens are basically seamless now on an up-to-date computer. About that one major exception, there is a loading screen every time you enter or exit a door that leads to a new area. Once again, the loading time is near instant on up-to-date computers but it would have been nice to not have a loading screen at all. As noted earlier, you can play the game in either first person or third person as you choose, plus you can easily switch between the two with a simple keystroke. 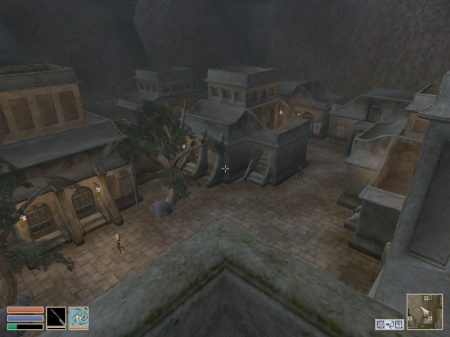 A rooftop view of the beautiful city of Balmora.

Some might think that an RPG cannot work on the PC as far as controls go. But let me tell you, they most definitely can and I think that the game is better because of its use of the keyboard. A simple click to swing your weapon or cast your spell, an effortless keystroke to access your inventory. Of course you can map any weapon swap or magic spell to a macro key for easy accessibility. In fact, there are so many different things you can do such as readying a weapon/spell, switching weapons, swinging, casting, etc., I would find it more complex to do all of that on a controller. Obviously, with the versatility and all of the options comes a learning curve but after a short hour or two of play, the controls become second nature.

Sadly, every review must mention the bad things about a game. Luckily, there isn’t much that is bad in Morrowind. I have already mentioned the single soundtracks for exploring and combat, and the loading issues. When the game first came out, there was no way to tell how much health an enemy had, but in a patch soon after release, they added a health bar. Another deterrent is that there is a lot of text to read. There is some recorded dialogue but it is very minimal and most of it is short comments like “Make it quick, outlander.” or “You n’wah!” Also, the game really isn’t challenging enough. Once you hit around level forty, nothing poses the slightest challenge; you can easily take out a whole town without losing much health. Furthermore, since the game is completely open-ended, you can easily go and steal the best armor from people if you know where it is. Lastly, the journal system used to track quests is quite hard to understand and use. That’s about it as far as cons go.

Whew, enough bad talking. I saved the best part of the review for last; a brief description of the world and story. When I said this game was open-ended, I meant as open-ended as it gets. You can be anything you want; a barbarian, a ninja, an acrobat, a bard, a mage, a sorceress, an archer, a thief. The list goes on and on, you can even create your own class. There are hundreds of weapons and hundreds of pieces of armor. Spells come in the unlimited since you can create your own. There are a multitude of potions and once again, you can create them yourself. A wide variety of monsters are at your disposal to kill and even more non-hostile NPCs that can be fought if you so please. There’s the main storyline, the Thieves Guild, the Mage’s Guild, the Fighter’s Guild, the Morag Tong, the three main houses, all with their own storylines/quests, plus a bunch of miscellaneous quests to do. The people all have their own religions, their own beliefs, their own cultures, and their own histories. All of these are documented in the giant amount of books that the developers hand wrote that are viewable in-game. On top of all this, there is still a huge modding community that is constantly making mods for the game. You can also mod yourself, since Morrowind comes with the TES Construction Set which allows you to build, you guessed it, mods. This translates into literally untold hours of playtime due to continually fresh content; all of it for free!

This mod adds Lightsabers to the game!

If you are an RPG fan like I am, this game is like finding your main character’s ultimate weapon. Even if you aren’t an RPG fan, you should give this game a try. Its truckloads of interesting and compelling lore are more than enough to hook any gamer. Obviously you won’t be blowing things up or going up against armies or anything, but just the sheer amount of things you can do, the huge number of areas you can explore (bandit’s hideouts, caverns, mines, beached pirate ships) is more than enough to warrant a pick up of this game. Six to twenty dollars is easily worth it to add this classic to your library of video games. It’s not really like any other game in that it’s so open-ended and does it so well. If it weren’t for its few and little flaws, this game would be an easy 100/100 but since load times and repetitive music gets on everyone’s nerves and being too powerful really saps the fun, I am giving The Elder Scrolls III: Morrowind a 92/100.